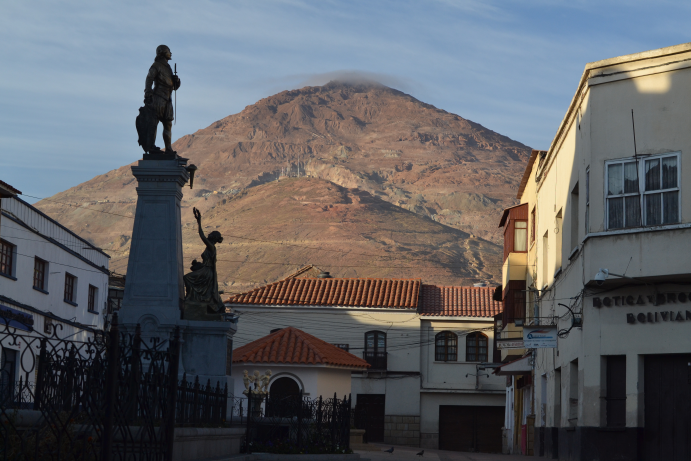 The Cerro Rico, red and perfectly shaped, towers over the old colonial town

In this 19-day Peru/Bolivia trip, I was deeply impressed by the grandeur of Machu Picchu, pleasantly stunned at the splendor of Cusco, shockingly amazed at the crater-like landscape of La Paz, and utterly elated by the sublime otherworldly views seen during the 4days/3night expedition that traversed the expanse of Salar de Uyuni and Eduardo Avaroa Andean Fauna National Reserve.  But, none of these awe-inspiring sceneries impacted me as deep as what I saw, heard, and felt in Potosi.  Potosi gives me a sad history lesson on the brutal exploitation of colonization.  This city history illustrates perfectly how one’s wealth and happiness are built entirely at the expense of someone’s appalling suffering.  In short, I have never been to a city whose history is as glorious and yet as tragic as Potosi is for a few reasons.

Potosi lies at the foot of the Cerro de Potosi, also referred to as Cerro Rico (“rich mountain”), in South Bolivia.  It is the only city that I know of in which its primary economy has been driven by its silver/other metals mining at Cerro Rico for the past consecutive 470+ years ever since a lode of silver ore was serendipitously discovered by an Indian servant named Diego Gualpa in 1545. The discovery turned a remote Incan hamlet into a city once being called as “Villa Imperial de Potosí “.

It is also the only city I know in which its enormous wealth, from silver mining, not only rescued Spain Empire in 16th century from the blink of bankruptcy, but also further bankrolled Spain's military expansion that extended her colonial territory boundary as far as Asia.  It was once the richest and most populated city with a population of approximately 200k at its peak.  In Spanish there is a saying, “Vale un Potosí”, or “to be worth a Potosi”, used when speaking of something of great value.  Even Emperor Charles proudly introduced Potosi by granting these words, “I am rich Potosi, the treasure of the world, the king of mountains and the envy of kings,” to be inscribed on the coat of arms.

However, sadly it is also the only colonial city I know of that between 1545 and 1825, many lives, estimated as many as 8 million people, died mining the hellish interior of this devil's mountain were sacrificed under the forced labor system implemented by Spain's insatiable lust for more silvers.  During the colonial era, the appalling working conditions caused high casualty among the indigenous people that Spain needed to import people from Africa.  These two groups of people, with no age restrictions, literally remained underground without daylight exposure for a 4-month rotation and mined under the illumination of dim light in 12-hour shift.  When they emerged, their eyes were covered to prevent damage.  In short, these people all died young.   This is the how and why Cerro Rico was and still is nicknamed as “man-eating mountain”.

Today, after nearly 500 years, the continued mining operation has caused the peak of Cerro Rico collapsed and lost 50 meters in altitude.  Efforts and regulations have been put in place to prevent further collapses, which could easily jeopardize the 1500 lives that work there at any given days.  Therefore, due to the lack of protective equipment, poor air ventilation, and the hallowing condition of Cerro Rico, the mining work was and still is very dangerous.   Many miners still die of accidents and/or silicosis pneumonia due to the poorly ventilated underground condition.  The expected lifespan of a miner is between 35 and 45 years old. 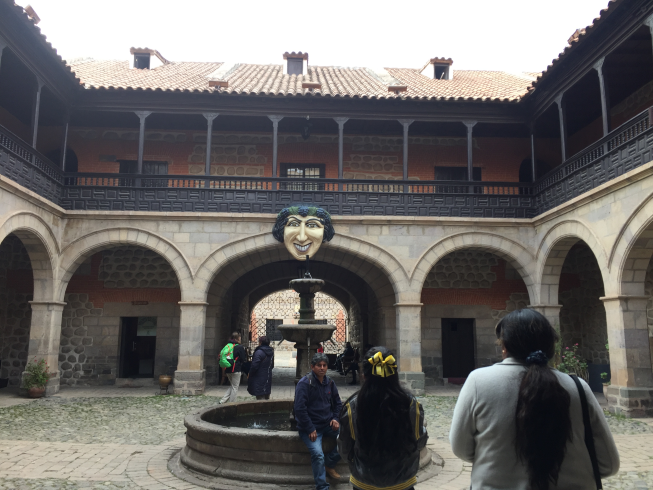 At its peak, Potosí’s former mint, the central Casa Nacional de la Moneda, was used for mass production of silver coins and bars for Spain.  “Official figures show a quadrupling of silver exports to Spain from Potosí from 1571–75 to 1581–85 (from 4.6 million to 19.1 million pesos), to a peak of around 5 million pesos annually in the 1590s.”   Silvers found in the Potosi mountain were sent here for refinement, molding, and impression into coins. They were then transported by llama and mule train to Panama City or Buenos Aires in order to be taken on Spanish treasure fleets to Spain.   Ironically, Bolivia currently doesn’t own a mint house; she relies on USA, China, Canada, and other countries for that.  This former mint house is now turned into a museum whereby the machineries used in old days are on display.  The combination of a tour guide’s explanation and the displayed machineries and with a little imagination, one could try to picture, right at the spot, the scenery of the many workers who toiled long hours in order to fleetingly fill the coffers of the Spanish treasury.

Over the years, the legacy of this mountain and its poor regulations over the mining operations have drawn attentions from worldwide.  Surprisingly, the outcome from the publicity is a steady stream of visitors flocking to this colonial city. 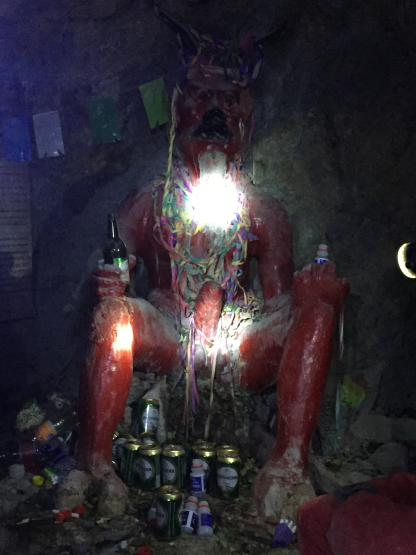 For this reason we came.  The more I read about the safety issue and the history of this mountain, the more torn i was.  To tour or not to tour the mining site inside this man-eating mountian.  Lastly, my intellectual curiousity overpowered my fear of mountain cave-ins incident.   I was glad that I went.

It was heartbreaking and haunting at the same time to see people toiling in such a pitch dark and hellish condition with primitive tools.   The miners here do not eat inside because of the arsenic found in the air. They suppress their appetities and boast their energy level by chewing coca leaves mixed with baking soda so that they can stay underground to search for the minerales that provide for their families. To overcome the depressive working environments, most miners also consume extremely strong alcohol and supertitiously worshipping Tio - a god of the underworld who holds the power of life and death between his fingers.  Above the ground, these miners believe in Catholicism; under the ground, they turn to uncle Tio for protections.

Out of fears, the miners will go a great length to appease Tio, the devil-figure, by making offering to him.  The offerings include coca leaves, alcohol, and cigarettes.  The alcohol will be poured on the hands, penis, and feet as they recite whatever prayers in Quechua language. Each Tio is assigned with a human name, such as George.

The 2 million dollar question remains - how much silver deposits still remain hidden beneath this mountain.  Most believed it be depleted by the Spanish era.  Nonetheless, there are other profitable mineral deposits like zinc, tins, and lead to be mined as well.

When we were at 4 levels down, we heard sound of explosions in the far distance.  For each explosion sound I heard, my anxiety level ratcheted up a notch.  We were underground for 1.5 hrs.  When the tour guide, Anthony, finally said, "we were heading out."  I heard myself exhaling a big sigh of relief.  I stumbled towards the same exit, through the small hole, and savored all the fresh air my lung could take.  In gratitude, I thank my God for the safety and the priceless experience.

As we were leaving and driving down the mountain, we saw a drunk miner pass out on the side of a street.  I can't help but wondering whether the toxic alcohol consumption habit, possibly induced by depression, may attribute to their shorter lifespan.  Whatever it is, the bottom line is that - such is their life.

Please note that this is not a place for people who are claustrophobic and asthmatic as it was dark, narrow and the air is silicon-saturated.

Coca leaves that they chew on during mining.

Tour guide Anthony explaining the life of a miner..

The white color thing they held in their hand is the dynamite miners used to explode the tunnel.

Overlook the city in the lower valley.

The little girl at the mining site.